The Age of Paper is Ending 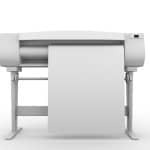 In the old days a client would bring a print job to a printer in the form of a mock-up drawing or an already designed print. An image would be captured either by photocopy, scanning, or photography. The image would then be cleaned up, enhanced, and examined for final quality. Then it would be sent to the print machine and printed however many times the client wanted in a print run. This process would repeat itself again and again each time a new job was ordered.

Today, professional print jobs are now entirely electronic. The digitization of print documents allow control of the production process entirely at the desktop level versus the need to design, frame, and produce on a production machine. Modern transfer involves literally the cyber-travel of documents and related information rather than the need for any kind of physical samples. The linkage now between customer, design and printing is now essentially seamless at the professional and commercial level.

Again, in traditional printing, a plate would need to be designed before the actual print production took place. This would take a while, delaying print jobs until the production plate was ready. Today, the above automation transfers a digital image direction to a plate-imaging system. Most printing presses are now utilizing this cross-breed plate design work, allowing clients to literally send orders to a printer and have them printed as they looked on the computer screen. The result has been a proliferation of café presses, allowing just about anyone to print their own book, an unheard of do-it-yourself business practice twenty years ago.

Making things far easier is the enhanced compatibility of design file formats across different platforms. It used to be that an Apple file couldn’t mix with a PC system and vice versa. Today, files move back and forth between different systems seamlessly. The days of file compatibility problems are long gone as well.

Given the above movement of information to production occurring a lot faster than before, printing technology changes have appeared just in time. Clients want more complex designs, in smaller jobs and with faster production times. Those printers who don’t want to comply will quickly find their business moving elsewhere to competitors who are accommodating. As a result, business is moving to smaller and smaller outfits as well as outsourcing overseas. Chinese and Indian outfits are making serious inroads into the graphic production business when large capacity orders are needed quickly. Again the digital transfer of production files makes this task fairly easy.

Unfortunately, this move to desktop control and digitization has definitely come with a cost. First off, the image setting photographer and film preparation tasks are no longer needed. These tasks and their related experts have now been put out of business being seen as essentially obsolete in the printing business now. Print shop management is probably not complaining too loudly, however. As labor-concentrated work is minimized by automation, there is far less delay on production runs as well. Additionally, large printing presses are finding themselves needing less staff on hand to do all the work involved. In fact, the streamline pressure is so significant, union shops try to get requirements put in place in their companies and agencies to generate print work that would otherwise not exist. This is common in government systems where collective bargaining is still fairly strong in preventing work being outsourced from government positions.

Where digitization of print has caused some serious hurt has been the electronic encroachment and delivery of books and periodicals. The rise of Amazon’s Kindle and Apple’s iTunes in the book, newspaper and magazine market have been no small niche ripple. These two market powerhouses have revolutionized how people read on the go, creating millions of dollars of revenue for digital files, without a shred of paper being printed on to delivery these consumer subscriptions.

For commercial print houses that traditionally handle the production of commercial reading material, the movement towards electronic print delivery to the consumer end point has been a serious shrinkage in demand for paper production. This trend is not likely to go away; in fact it will probably increase exponentially as tablets become more widely available at easier price points, being far more affordable than the Apple iPad. That said, there’s still something about reading a paper magazine or a paper newspaper with a cup of coffee in the morning, so some level of demand will remain as long as it’s affordable for the publishers.

At some point the print industry will entirely have to give up paper altogether. Both the march towards complete electronic transfer of consumable information as well as a demand for reducing environmental consumption will eventually wipe out the paper medium. This final shift may still be a bit of ways off into the future, but it will arrive. Those print shops that anticipate in time will be fully converted to digital design and production by the time paper printing gives up its swan song. Many of them are already marketing their new services in the form of Internet support, design, web page maintenance, electronic production and distribution, and even content development. These tasks and services are all a far distance from where traditional printing was only a decade ago.

Unfortunately, there will be plenty of businesses large and small that will fight eventuality right to the point when they go bankrupt for lack of clients and paper print demand altogether. This happens in every industry as it undergoes change and paradigm shifts. The print industry will live on, but the electronic age is now the bread and butter of its players.