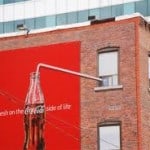 Building advertising is a tactic that is used by many different companies. Even so, there are a number of myths about it that never seen to go away. Where these things started is uncertain, but it is clear at least that people believe them and sometimes develop their entire advertising schemes around them. This is unfortunate, because people who do not use building advertising are missing out on a huge chance to get in touch with more of the market. The following are a few myths and the reasons why they are simply not true in the real world.

1. It Does Not Work
There is just no data to support the claim that this type of an advertising method does not work, that it does not bring in more customers. Buildings can be seen for long distances, meaning that they are in a high traffic area almost no matter where they are located. People will see them if they are walking, riding bikes, driving cars, or riding on the bus. The sheer amount of people who can be impacted by these signs shows that they must work.

2. People Ignore The Signs
The main complaint is that people forget that the signs are there and ignore them because they are so used to them. While this is probably true for some people, it is no more true with buildings than it is with billboards or other, similar forms of advertisement. Also, you have to consider that people are used to seeing the sign and so you do not need them to be reading it every time they walk past. You just have to make sure that they remember it when they are looking for something that you have to offer.

3. It Is Too Expensive
This is also not true. You will have to pay money to have an ad on the side of someone’s building, but it will not usually be as much as you would pay for a billboard. You have to look at it from the owner’s perspective. While a billboard was constructed only as a vehicle for advertising, a building was created to house a business, offices, or an apartment complex. Everything the owner makes will be extra, so he or she will not charge as much.

4. People Cannot Read The Banners Fast Enough
This is only true if you have done a poor job designing the ad. You need to remember that people will be passing by the building quite quickly if they are in a bus or a car. Keep your words concise. Use as few words as you can to say as much as possible and you will have no problems.